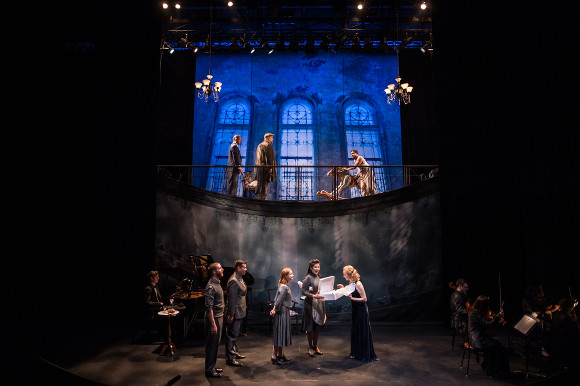 The designs for this production (it’s a a Tapestry production not a co-pro with our Caledonian friends) are extremely effective.  It’s a two level set.  The upper tier functions as Paul’s bedroom and the grandstand at the racetrack while the lower tier serves as the public rooms of Paul’s house.  The use of a scrim allows the four singers voicing the “House” to remain somewhat ghostly presences.  Making maximum use of the rather awkward space the piano is placed at one side of the stage and doubles up as Paul’s mother’s piano while the rest of the band; a string quartet, frame the action on the other side.  Jordan de Souza conducts from the extreme side of the stage repeated on a monitor on the front of the balcony.  It’s a clever use of difficult space so full credit to Camellia Koo, Michelle Ramsay and Ming Wong.

Michael Mori’s production makes effective use of the space and does a good job of focussing us on the relationships within this emotionally distant family.  In the end, this work as incarnated is more a psychological drama than a Jamesian ghost story and as such places a lot of demand on the singers to provide the necessary intensity.  They do.  Asitha Tennekoon is entirely credible as the naive and puzzled Paul.  He also manages an exceptionally physical role very well without appearing to negatively impact his singing.  It’s an impressive performance for a comparatively inexperienced artist.  Carla Huhtanen also convinces as the distant and repressed mother though naturally it’s not as expressive a role.  There’s good back up from Peter McGillivray as Bassett, the health care worker, and Keith Klassen as Paul’s slightly dodgy uncle.  The House is voiced in hushed whispers of “There must be more money” by Sean Clark, Aaron Durand, Erica Iris and Elaina Moreau who also double up as servants in the party scene. 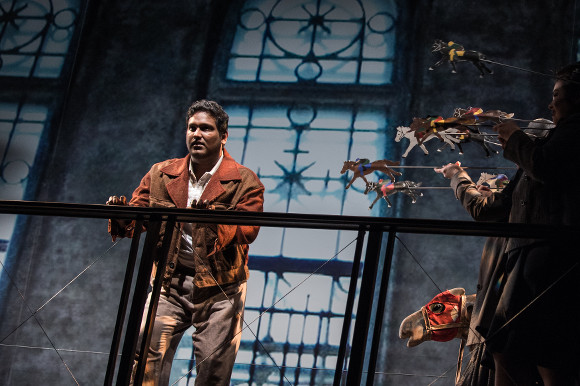 The score is interesting.  The instrumental writing is very lyrical with elements of minimalism.  It’s actually quite beautiful to listen to and emotionally apt.  It also made full use of the colour palate possible with a piano quintet.  The vocal writing, as so often the case with new opera, is quite spare and doesn’t give much opportunity for vocal fireworks.  Bel canto this is not.  That does have the advantage though that the words can be conveyed clearly and I didn’t feel that the absence of surtitles was a problem.  (A printed libretto was provided but I have never learned to read in the dark).  The playing from the piano quintet was quite lovely.

All in all, I think this is a worthwhile addition to the contemporary chamber repertoire and it gets a very good presentation in this Tapestry production.  I hope Scottish Opera pick it up as it deserves to be seen more widely.  Rocking Horse Winner runs at the Berkeley Street Theatre until June 4th.

1 thought on “There must be more money”