In 2006 the Salzburg Festival staged all 22 Mozart operas and Decca released them all on DVD. Die Zauberflöte appeared in a Pierre Audi production originally staged in Amsterdam.

The stage design features very bright colours with overtones of African tribal art. The costumes are similarly vivid. The whole thing has a childlike quality exemplified by Papageno’s “clown car” and the model aeroplane that the three boys fly around in. It’s very different from the rather darker and more subdued 2003 ROH production (available on DVD and Blu-Ray from Opus Arte).

The cast is excellent and there are no weak links in the singing. Rene Pape is predictably excellent as Sarastro and Diana Damrau is a note perfect and terrifying Queen of the Night. The always solid Paul Groves makes Tamino a bit less dull than usual. Christian Gerhaher is an excellent Papageno with good physical presence and comic timing. Genia Kuhmeier avoids the trap of making Pamina a wimp and sings the big numbers beautifully. Ricardo Muti conducts the Vienna Philharmonic (careful observers will spot two women in the pit). Musically I’d say this is about as good as it gets.

The DVD is 16:9 anamorphic and has a choice of LPCM stereo or DTS 5.1 sound (the latter much better!) and it was filmed in HD. It looks and sounds very good. The video direction, by Brian Large, is not especially annoying for once. 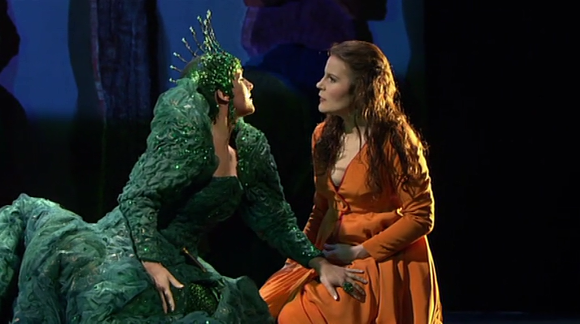 This is one of the better Magic Flutes available on DVD. The main competition would be the 2003 ROH production by David McVicar which is much darker. It too has a strong cast and it has Simon Keenleyside’s very interesting take on Papageno. There’s also Robert Carsen’s Baden Baden version.  It’s complex and not perhaps a “beginner’s Magic Flute” but it has much to offer.

7 thoughts on “Die Zauberflöte in Salzburg”